The Role of Dietary Protein in Longevity - Part 1

In the United States, we are enamored with dietary protein. Over and over again in popular literature and advertisements, we are encouraged to consume massive amounts of protein. If you are into bodybuilding or strenuous training, the encouragement turns to demands.

But is this love affair with dietary protein really beneficial? Many experts are now saying that consuming too much protein can actually be detrimental to your health, and may even shorten your life.

How Much Dietary Protein Do You Need? 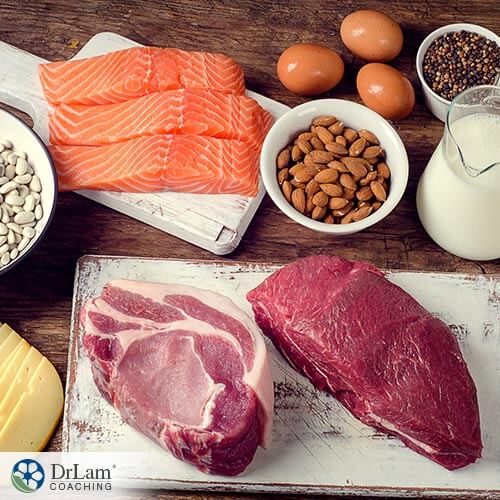 We are bombarded with information, and some would argue misinformation, regarding protein and the amount you need. So accurate information about the necessary amount of dietary protein is important.

Of course, you need protein to build and maintain muscles, bones, and skin. Protein is involved in every cell. Because your body doesn’t store protein, you have to consume it every day. There are about 10,000 proteins in your body that make you who you are and maintain your body and its functions.

These suggested amounts are a great deal lower than what most Americans consume.

Another source, the Institute of Medicine, recommends 0.8 grams of dietary protein daily for every kilogram, or about 20 pounds, of body weight. This same institute has set a fairly wide percentage range of acceptable daily intake of dietary protein: 10 to 35% of caloric intake per day.

One reason high protein diets are so popular is that consuming protein fills you up for a longer time than other foods. Proteins are hard to digest, so you keep that full feeling for longer. This gives people the idea they can control their appetite better. Digesting protein also increases your rate of thermogenesis. It requires more energy to digest, metabolize, and utilize protein. It is important to keep in mind you have to consume protein regularly throughout the day and not just at one meal. Positive protein balance only lasts about three hours after consuming the protein.

Exercise must also be a major part of your lifestyle if you choose to go high-protein. Your overall lean body mass will typically be maintained with a high-protein diet, and you will usually build more lean muscle mass. Strength-building exercises will help you with building lean muscle and in utilizing your protein intake.

While the amount of protein you consume daily is important, research also shows the source of the protein to be equally important.

In any case, these essential amino acids are just that: essential for building sufficient protein.

If there is a lack of amino acids in plant-based proteins, those who depend only on vegetables should be aware they need to eat a variety of plants to get sufficient amino acids.

Whether you choose animal sources or plant sources for your dietary protein, it’s advisable to vary what you eat. If you choose meat, eat seafood or very lean red meats. 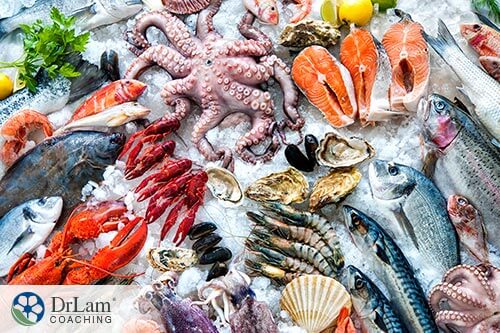 Seafood, especially those fish that are from cold-water sources, are typically high in Omega-3s, which are important for your healthy diet. You do have to be careful to choose fish that are high in these essential oils and do not carry the risk of high levels of mercury. Salmon and trout are good fish for this reason.

Eggs are a good source of protein, also. They have gotten a bad reputation in the recent past, but research has shown that reputation to be undeserved. Eggs should be a part of your diet. The yolk of the eggs contain saturated fats, but the whites do not.

Plant proteins should make up the larger part of your protein intake. Not only are plants like beans, peas, soy products, nuts, and seeds high in protein, they also are low in saturated fats and high in fiber. Good levels of fiber are important for longevity.

When you choose meat as your source of dietary protein, keep the portion sizes small. Vary the way you prepare them, as well. Grill, roast, bake or broil meats to keep your palate satisfied. Lean meats may need to be cooked more slowly to be kept moist.

Make sure you check the sodium content of both types of meat and plant products. Salt is often added to processed foods to act as a preservative and to improve the taste.

If poultry is your source of dietary protein, you need to be aware of a couple of things. Dark meat is usually higher in fat content, so choosing lean cuts is healthier. The skin of poultry is high in saturated fats, so removing it will be better for you.

Dairy foods are good sources of protein. Milk, yogurt, and cheese also have good levels of calcium to help keep your bones strong.

Some experts on how your body uses protein have begun advocating going to a plant-based diet. Their concerns involved how much fat is included in meats. Beans especially are said to be excellent sources of protein and fiber. Concerning the gas that may develop when beans are eaten, these experts report the gas development goes away after about two weeks of eating beans daily.

Another concern these experts have with meats and dairy products is the fact that these products often contain excess estrogen. Estimates say between 10,000 and one million times the amount of estrogen is found in meats and dairy, as compared to plant sources of protein. This much estrogen added to your diet can result in estrogen dominance in both males and females. In addition to significant symptoms that are very uncomfortable and dangerous, estrogen dominance can seriously affect your longevity in a negative way.

Another point in favor of using plant sources for your dietary protein is that plant-based protein lowers inflammation. For many reasons, inflammation is increasing in our country today. If you are one of those people unfortunate enough to suffer from Adrenal Fatigue Syndrome (AFS), you already have significant amounts of inflammation in your body. Going to a source of protein that fights inflammation can help you live a more healthy life. 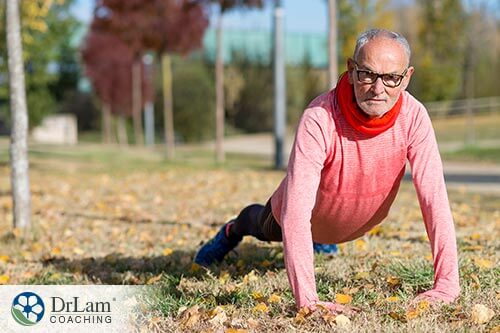 More than 6,800 adults, age 50 and up, responded to the Third National Health and Nutrition Examination Survey. The researchers used this data to link it to the National Death Index data. This later data provided information on the timing and causes of death.

This group of subjects were divided into two age groups: those age 50 to 65, and those 66 and older. They were also divided into three groups according to their reported protein intake. The groups were separated into high (those with 20% or more of their calorie intake made up of protein), moderate (10% to 19%), and low (less than 10% of total calorie intake made up of protein).
In the younger group, age 50 to 65, those with a high intake of protein suffered a 75% greater incidence of mortality overall. This group also had four times greater risk of mortality from cancer in the next 18 years compared to those in the low protein intake group. The group that was moderate in protein intake was three time more likely to die from cancer compared to the low protein intake group.

When these results were adjusted taking various other factors into consideration — for example, smoking status and chronic health conditions — there was no change when fat or carbohydrate percentages were considered. But the source of dietary protein did make a difference. The results were found only when the source of dietary protein was meat products compared to plant products.

The research also showed all ages to have a five times greater risk of dying from diabetes. 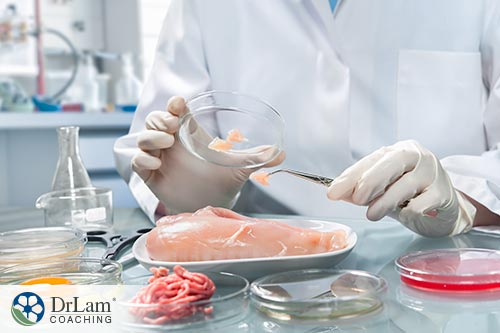 Some limitations of the study were also seen. One of those limitations was that the subjects were asked to recall their protein intake over only one 24-hour period. Another limitation had to do with the lack of evaluation of the specific types of either plant or animal protein.

Studies with mice generally supported these findings. Those fed diets high in protein showed increased growth of breast and melanoma cancers compared to those fed a low protein diet. An interesting contrary finding, however, showed that a low protein diet had detrimental effects on older mice. The researchers hypothesized the connection between protein and longevity was moderated by an insulin-like growth factor pathway.

Researchers suggested older people should not consume a low-protein diet. Their belief is that dietary protein levels should be kept up to prevent frailty and maintain good weight.

The evidence is clear that diet affects longevity. What isn’t known for certain is what combination of foods is best for increased longevity. Two studies published in Cell Metabolism both report low-protein diets to be an important factor until old age.

Both studies found that the products that made up the diet and the amount of animal protein consumed affected longevity and overall health. One study reported consumption of high levels of animal protein to lead to a great increase in the incidence of cancer and mortality in middle-age adults, with the opposite result in older adults. The second study reported a diet high in protein and low in carbohydrates to lead to a shorter lifespan in mice.

In the first study, researchers at the University of Southern California concluded that increased risk of mortality with high levels of protein could be due to stimulation of growth hormone and insulin-like Growth Factor 1. These two factors naturally decline with age, along with body weight, potentially explaining why older adults did more poorly with a low-protein diet. Another finding came from further experimentation with mice. It showed that some of the amino acids present in protein can decrease cellular protection and increase DNA damage, accounting for the increased risk of cancer production effects of protein in humans. 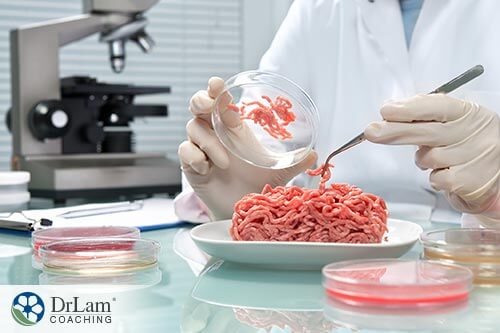 The second study, conducted in Australia, compared mice on 25 different diets. The researchers evaluated the effects of protein, fat, and carbohydrates on longevity, aging, metabolic health, and energy intake. A high-protein, low-carbohydrate diet was found to lead to lower levels of body fat and decreased food intake. However, this diet also resulted in a shorter lifespan and poorer cardiometabolic health.

The research also showed a low-protein, high-fat diet to be very detrimental. A high-carbohydrate, low-protein diet was the best for increased longevity and better cardiometabolic health. This was in spite of the fact that it led to increased food intake and body fat. This led the researchers to conclude that reduced calorie intake had no good effect on longevity. Restriction of caloric intake with no malnutrition has been shown to add to longevity in many animal models.

A very important outcome of this research showed that not all calories are the same. In order to consume the most beneficial diet, it is important to know where the calories come from and how they interact. The best diet appears to contain moderate amounts of good quality protein, along with low fat content and high levels of complex carbohydrates. This kind of diet will increase longevity and improve metabolic health.

Is weight loss the primary use for dietary protein?

No. While dietary protein does play a part in helping people lose weight, there are other benefits, as well. A major benefit is in overall health when appropriate levels are consumed. However, too much can lead to significant health issues. 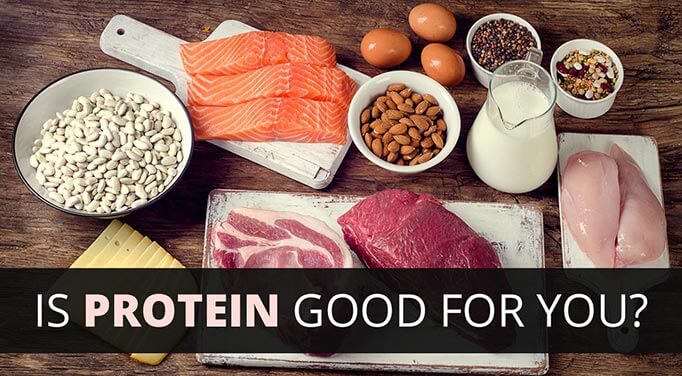