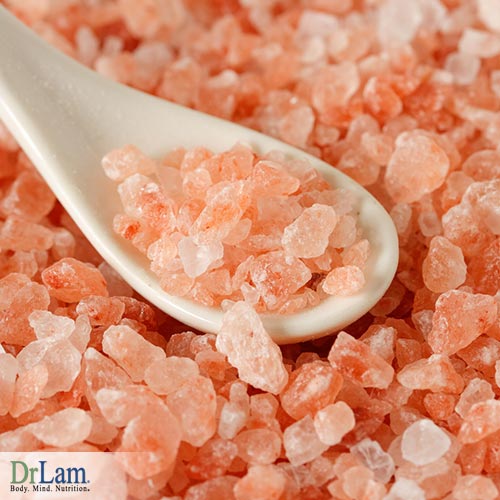 What is one ingredient that can either make or break not only your recipe but also your health? – It is the humble salt. In today’s world, salt is more common than it used to be in the past. Not every salt is same. While shopping, you can find various types of salts ranging from the regular salt, garlic salt, to Celtic sea salt. Himalayan sea salt is special form of salt that is gaining in popularity.

Himalayan sea salt is also known as Himalayan pink salt due to its characteristic pink color that comes from the presence of rich minerals, especially iron. Himalayan crystal salt and Himalayan rock salt are other names for this mineral salt.

Salts come in various hues: stark white, white, grayish, pink, pale green, and dark pink. It is not just limited to color; the texture also varies from fine grain, coarse to flaky. Salt is an essential ingredient that finds a place in everyday life without which your food tastes bland. This is one ingredient used in almost all dishes.

Moreover, this applies to desserts as well. Did you know that adding just a pinch of salt to sweet dishes greatly enhances flavor?

There is much more than just taste that this mineral offers. Salt plays an important role in efficient bodily functions. Salt is essential to carry out several biochemical processes in the body including the healthy functioning of adrenal glands, thyroid glands, nutrient absorption, cell wall stability, nerve stimulation, muscle contraction and pH balance. It has also been used for centuries in preserving food.

Since Himalayan pink salt is sourced from very deep salt fields and extremely rich in minerals, it is considered more pure and healthier than any other salt. 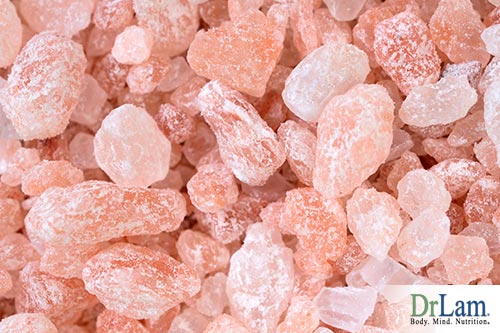 Salt is a mineral. Its chemical composition is comprised of sodium chloride: NaCl – a combination of one sodium and one chloride ion each. Salt contains 40 percent of sodium and 60 percent of chloride by weight. Oceans and lakes are reservoirs of dissolved salts whereas underground earth is a source of salt in hard rock form. Other sources of salt include evaporated seabeds such as in Death Valley National Park, California and the Bonneville Salt Flats in Utah.

Himalayan pink salt is fossilized sea salt, sourced from the foothills of the Himalayan Mountains. What makes Himalayan sea salt so extraordinary and unique is that it contains over 84 minerals that can rarely be found in a single ingredient. These minerals include macro-minerals as well as trace minerals. Calcium, chloride, zinc, iron, phosphorous, magnesium, sodium, chloride, copper, manganese, chromium, zinc and selenium are some of the minerals found in this natural salt.

It is believed that Himalayan rock salt has been formed from the dried remnants of the primal sea. While other salts are mostly white, Himalayan crystal salt comes in pink, red, or white – or in a blend of these colors – a clear indication of the presence of rich minerals. Regular salt involves heavy processing, unlike high-quality Himalayan pink salt which is hand mined and unprocessed.

Here is why Himalayan pink salt is superior: 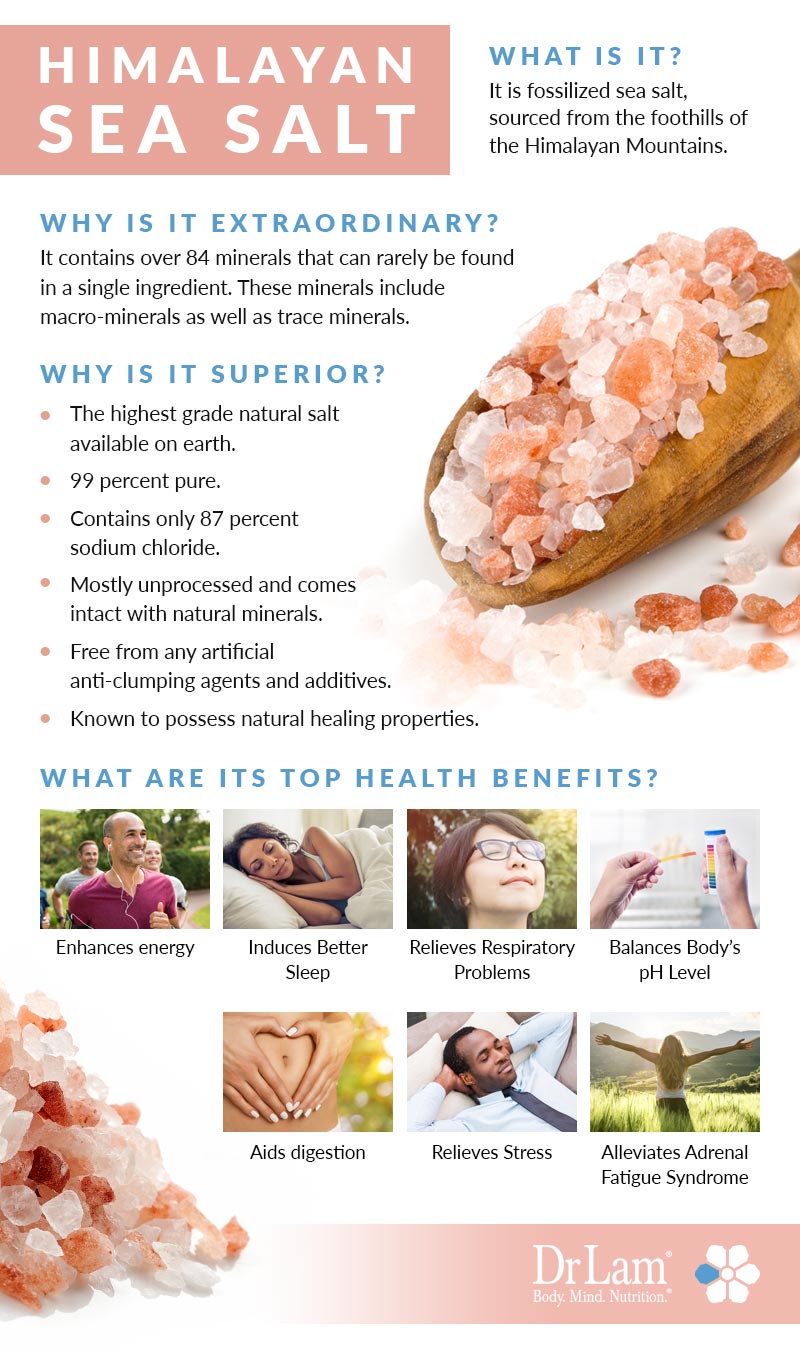 The presence of rich minerals and comparatively low sodium content is what makes Himalayan sea salt healthier over table salt.

Let us look into the top health benefits of Himalayan sea salt: 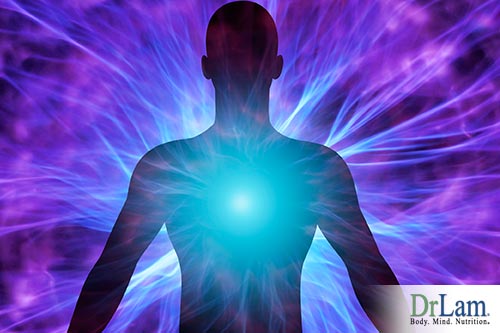 Natural crystal salts are readily absorbable by your body and do not burden your system. Himalayan pink salt is natural, unprocessed, and when seen under a microscope, shows a perfect crystalline structure. Hence your body can easily absorb this salt without spending much energy on the absorption process. The result – your body gains energy by consuming Himalayan rock salt.

Table salt undergoes several refining processes during which the molecular structure of the salt changes. While the salt’s irregular structure might not have any effect on its taste, it has certain effects on your health. Your body needs to spend more energy to absorb table salt resulting in greater energy loss than energy gain.

Insomnia is a major problem in people suffering from adrenal exhaustion. Research has related insomnia with a low-sodium diet. Dr. Michael V. Vitiello, director of the Sleep and Aging Research Program at the University of Washington, points outs that low sodium in the blood causes a decrease in blood volume. To compensate this, the sympathetic nervous system becomes active. As a result, sleepers wake up and find difficulty in getting back to normal sleep. Himalayan crystal salt being rich in minerals encourages better sleep which, in turn, greatly helps in alleviating adrenal fatigue.

The presence of rich minerals and electrolytes in Himalayan salt balances pH level in your body by maintaining a healthy acid-alkaline ratio. Healthy pH level is vital for a good immunity system and proper digestion. 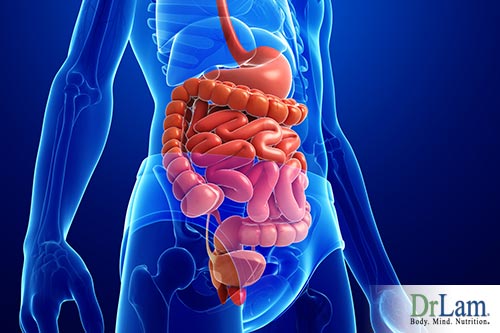 A saturated solution of Himalayan salt and purified water, known as sole, can be used for a salt water flush. Sole promotes a healthy digestive system as well as balances your stomach acids ensuring proper digestion. It also helps in healthy secretion of various digestive fluids in the pancreas and liver.

Natural ingredients are known to offer greater health benefits and also work as better stress boosters than refined ingredients. Himalayan sea salt is pure and natural with a perfect crystalline structure. Including rock salt in the diet helps relieve stress. Breathing clean air relaxes your mind and helps in releasing stress. Himalayan crystal salt lamps act as a natural air purifier by removing vapor from the air and trapping the allergens. Himalayan crystal salt baths are another way to de-stress yourself. Your body easily absorbs the rich minerals – stimulating and rejuvenating your skin – besides providing relief from body aches and cramps.

Himalayan sea salt is known to contain over 84 trace minerals including selenium, calcium, magnesium, and zinc. These minerals have the property to induce better sleep, promote healthy body functions, restore sodium level in blood, flush out body toxins and relieve inflammation. Studies have related selenium deficiency with adrenal exhaustion. By including rock salt in your diet, your body benefits from the rich minerals.

Other health benefits of Himalayan crystal salt include:

Other things you will need:

Add about 1 tsp of sole into a glass of drinking water and have it as the first thing on an empty stomach. Make sure you do not add more sole to your glass of water. If you experience any detox reactions such as nausea or a headache, then you can always start with a smaller quantity 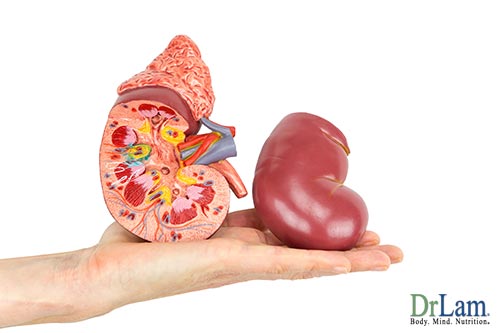 Over 80 percent of the worldwide populations suffer from adrenal fatigue at some point in their lives. If you experience excess fatigue along with symptoms of low energy level, brain fog, insomnia, more salt craving, irritability, a decrease in concentration level, or difficulty in waking up during the morning, then AFS might be the actual problem. To deal with excess stress, your body has a self-regulatory system called NeuroEndoMetabolic (NEM) Stress Response.

During adrenal gland fatigue, your adrenal glands do not produce adequate stress-control hormones such as cortisol, aldosterone, and adrenaline. This disrupts the sodium balance in your body and increases the need for sodium intake. Hence people with AFS have salt cravings.

Himalayan sea salt is rich in several minerals, including sodium, that help to restore normal functioning of adrenal glands and satisfy salt cravings. It also supports the effective functioning of NeuroEndoMetabolic (NEM) Stress Response – thus helping to fight AFS. Moreover, your body can easily absorb rock salt due to its perfect crystalline structure.

Our body produces neurotransmitters or biochemicals through certain chemical reactions. Biochemicals help in secretion of anti-stress hormones; hence, any imbalance in these chemicals can cause adrenal gland disorder resulting in adrenal exhaustion.

Himalayan crystal salt is loaded with several trace minerals which act as a catalyst in these chemical reactions and produces neurotransmitters. These neurotransmitters send the signal to your brain through the nervous system for secretion of essential hormones. It is then your adrenal glands and thyroid glands which secrete hormones and help your body to convert carbohydrates and fat into energy. Minerals in rock salt ensure efficient anti-stress hormonal secretion thus maintaining your body’s energy and minimizing excess fatigue.

Salt is essential to ensure healthy functioning of your body. It is important to use salt in moderation to reap complete health benefits. Upgrading to unprocessed, pure, and mineral rich salt such as Himalayan sea salt adds flavor to your food besides providing immense health benefits.

How to use Himalayan sea salt? Can it be replaced with table salt?

Table salt is refined, contains sodium, chloride as well as added iodide and anti-caking agents. Upgrading to Himalayan sea salt is healthy as it is pure, natural and comes loaded with over 84 minerals. Moreover, Himalayan sea salt is less in sodium content. However, just like other salts, it is always advisable to take Himalayan sea salt in moderation. It can be directly added to your food like table salt. The daily recommended sodium intake is 2,300 mg. In the case of people with diabetes, high blood pressure and seniors, sodium intake should be limited to 1,500 mg per day.