How An Inflammatory Diet Can Degrade Your Health 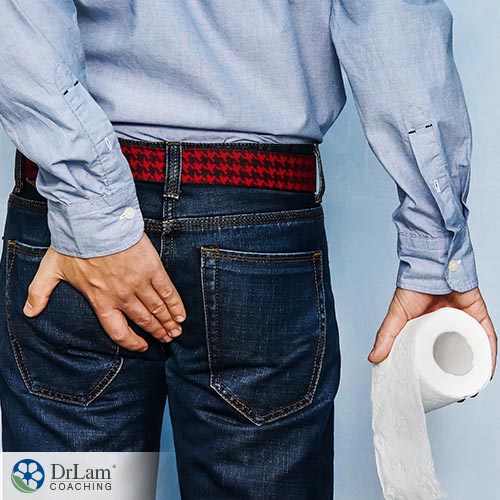 Cancer is one of the killer diseases facing the world today. To date, researchers have identified over 200 types of cancer and more extensive studies are in progress. Among the different types of cancer, colorectal ranks second in terms of number of deaths. An inflammatory diet contributes to unhealthy inflammation, which can lead to a number of health issues including cancer. Studies have linked an inflammatory diet with an increased risk of colorectal cancer.

According to estimates by the American Cancer Society, 1 in 23 women and 1 in 21 men in the United States are likely to develop colorectal cancer in their life. Thankfully, with rapid advances in screening and treatment techniques, the mortality rate due to colorectal cancer is decreasing.

A study at the Harvard T.H. Chan School of Public Health in Boston found a link between an inflammatory diet and colorectal cancer. The study used the empirical dietary inflammatory pattern (EDIP) score based on 18 food groups that characterize dietary inflammatory potential and involved 46 804 men and 74 246 women followed-up over a 26-year period. Cox regression was then used to examine the link between EDIP score and colorectal cancer risk. Other details such as body weight and alcohol intake were also taken into account.

After an extended follow-up of over 2 571 831 person-years, researchers documented about 2 699 incidences of colorectal cancer. Further, the study demonstrated that participants with the highest EDIP quartile (Q) developed colorectal cancer at a rate of 151 and 92 per 100,000 person-years for men and women, respectively, compared to the corresponding 113 and 80 found for participants of the lowest Q. At the end of the study, researchers suggested an inflammatory diet increases the risk of colorectal cancer in both men and women.

What is Colorectal Cancer?

When cancer occurs in both the colon and rectum it is referred to as colorectal cancer. This type of cancer affects men and women equally. Depending on whether the cancer starts in the colon or rectum, it may also be called colon cancer or rectal cancer. The two cancers have several features in common.

The colon and rectum are part of the digestive system. Most of the large intestine is referred to as the colon except for the last six inches nearest to the anus, which is referred to as the rectum. Your body extracts salt and water from solid waste in the colon and anything leftover waste moves to the rectum, where it is stored until it passes out of the body through the anus.

Some of the symptoms associated with colorectal cancer include constipation or diarrhea, changes in bowel movements, bright red blood coming from the rectum, abdominal pain and bloating, blood in stool, a feeling of fullness in the abdomen even without eating, unexplained weight loss accompanied by iron deficiency, and fatigue. However, most these symptoms may also be indicative of other health issues. Therefore, it is recommended to consult your doctor if symptoms last longer than four weeks.

How Does Colorectal Cancer Actually Start?

In most cases, colorectal cancer starts as a polyps or growth on the inner lining of the colon or rectum. While all polyps do not form cancer, some pose the risk of developing into cancer. A polyp is more likely to be cancerous if it has the following characteristics:

Some of the risk factors contributing to colorectal cancer include an inflammatory diet, low fiber diet, high alcohol consumption, high intake of saturated fats and animal proteins, smoking, and obesity. People with a family history of colorectal cancer or who already have uterine or breast cancer, irritable bowel syndrome, or ulcerative colitis are at a higher risk of developing colorectal cancer. Polyps found in the colon and rectum may also become cancerous and spread to other parts of the body. Staying away from an inflammatory diet, in addition to avoiding alcohol and tobacco, has been shown to remarkably reduce the risk of cancer. 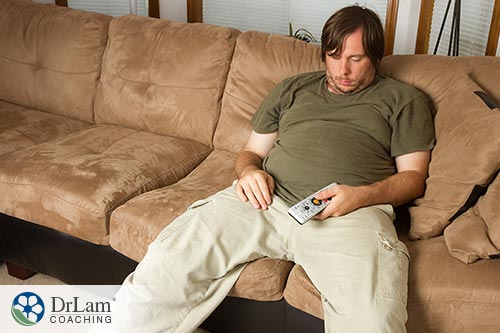 Fatigue due to cancer is highly prevalent. Over 75 percent of untreated cancer patients complain of tiredness and that number increases to 90 percent when patients undergoing chemotherapy or radiotherapy are considered. Cancer-related fatigue causes extreme tiredness and this exhaustion does not improve with adequate rest, which can further degrade quality of life during different stages of cancer.

Colorectal cancer is known to have high incidences of fatigue. Despite being one of the worst and most commonly occurring symptoms, fatigue is not given much attention. However, tiredness can be a sign of other underlying health problems. Experiencing extreme fatigue along with symptoms of anxiety, insomnia, low energy levels, difficulty waking up, brain fog, low concentration levels, and constipation may be indicative of Adrenal Fatigue Syndrome (AFS).

Suffering from colorectal cancer can be an extremely stressful experience. Getting diagnosed with cancer can be very distressing in the first place and stress and fatigue will only worsen as the disease progresses. Your body is equipped with the NeuroEndoMetabolic (NEM) stress response system which helps fight stress. It is an intricate network of various organs and six circuits working together in unison. During stressful situations, the NEM stress response signals to your adrenal glands, which then secrete the anti-stress hormone, cortisol. However, if stress persists, your adrenals can become overburdened and cortisol secretion decreases. This can affect your body’s ability to deal with stress, thus, making you feeling fatigued.

Is Inflammation Good or Bad for Your Body?

Inflammation is an important part of the immune response and aids in your body’s healing processes. When any part of your body is injured or affected by harmful irritants, an inflammatory response is activated and works to remove the irritant and initiate the healing process. Symptoms of inflammation include redness, pain, swelling, immobility, and heat.

However, in certain cases, the immune system triggers an inflammatory response in your body even though there are no foreign invaders to fight. Under these conditions, inflammatory cytokines—released into the blood during inflammation to initiate the healing process—begin to attack your body’s healthy tissues as if they were infected. Thus, an otherwise protective immune system begins causing damage to otherwise healthy tissues. When unhealthy inflammation becomes chronic, it can eventually lead to health conditions including Adrenal Fatigue, autoimmune diseases, and colorectal cancer. Unhealthy inflammation poses numerous health risks and may eventually lead to tumor growth or cause existing cancers to spread to other parts of the body.

Here is a list of some of the inflammatory foods that increase chronic inflammation:

Excessive intake of glucose-containing sugar can raise levels of pro-inflammatory messengers known as cytokines. This is because your body cannot process the excess glucose quickly enough. Moreover, sugar suppresses the germ-killing capacity of your white blood cells, thereby weakening your immune system. This makes your body more susceptible to disease. Foods high in sugar include baked goods, snack bars, candy, cold beverages such as coffee drinks and sodas. Studies have shown that a low GI-diet that includes plenty of whole foods and grains can reduce inflammation. 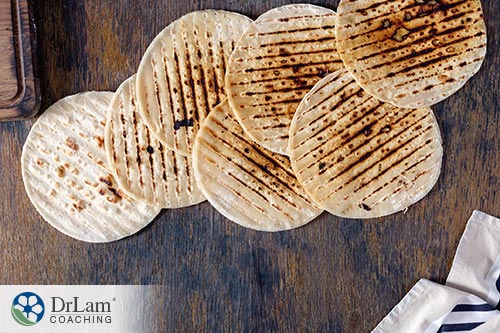 Refined flours lack nutrients and fiber, therefore, your body easily breaks down foods made from refined flour. The faster your body digests foods, such high carb foods containing glucose, the more your blood sugar levels spike. This can also leads to a spike in insulin levels, which is directly linked to the pro-inflammatory response. Studies have shown that a high intake of refined grains raises the level of inflammatory marker PAI-1. High carb foods include white bread, bagels, flour tortillas, pasta, and pizza. Substituting these with more whole grains has been shown to reduce inflammatory markers in the blood.

Vegetable oils such as sunflower, corn, safflower, soy, and palm oil contain high concentrations of omega-6 which is a pro-inflammatory fatty acid. Omega-6 to omega-3 in the ratio of 1:1 represents a healthy score. However, the ratio of an average person in America was found to be 20:1 since they tend to eat a lot of vegetable oil-laden foods. Some of the hidden sources of omega-6 fatty acids include store-bought mayonnaise, crackers, potato chips, barbeque sauce, salad dressing, and baked products.

Artificial sweeteners are often labeled as a healthy alternative to refined sugar. However, studies in both men and mice have shown that artificial sweeteners increase the risk of glucose intolerance by altering the gut microbiome. These studies further revealed that sweeteners can, in fact, worsen type-2 diabetes leading to bad bacteria in the gut and reducing the amount of good bacteria that release anti-inflammatory compounds. When glucose is not properly metabolized by the body, this can cause the release of inflammatory cytokines. Diet beverages and zero-calorie or no-sugar-added products are common culprits.

Meat from cattle and poultry fed on diets of corn and soy may contain pro-inflammatory omega-6 fatty acids. Moreover, these animals are injected with antibiotics and weight gain hormones, which are harmful to both cattle and humans. Processed meats are the worst foods you can eat as they are high in inflammatory compounds, artificial additives, and food coloring, which means your immune system will detects them as foreign invaders and trigger inflammation.

Inflammation is a vital part of your immune response. It protects your body from irritants, helps fight infection, repairs damaged tissues, and initiates the healing process. However, when inflammation becomes chronic, it can lead to several health issues including Adrenal Fatigue, arthritis, acute bronchitis, sinusitis, and cancer. Studies have linked an inflammatory diet with an increased risk of colorectal cancer. Other factors such as smoking, alcohol consumption, and diets that are low in fiber and high in saturated fats can also be contributing factors.

Eating an inflammatory diet can increase the levels of inflammatory markers in your blood. Strategically planning to stay away from inflammatory foods, along with performing regular exercise, incorporating anti-inflammatory foods into your diet, minimizing stress, and making other healthy lifestyle choices can significantly reduce inflammation and cut down your risk of developing diseases like colorectal cancer.

What are the various health problems associated with an inflammatory diet?