Home > Diet and Nutrition > Adrenal Fatigue Diet > Why Do You Experience Fatigue After Eating?

Why Do You Experience Fatigue After Eating? 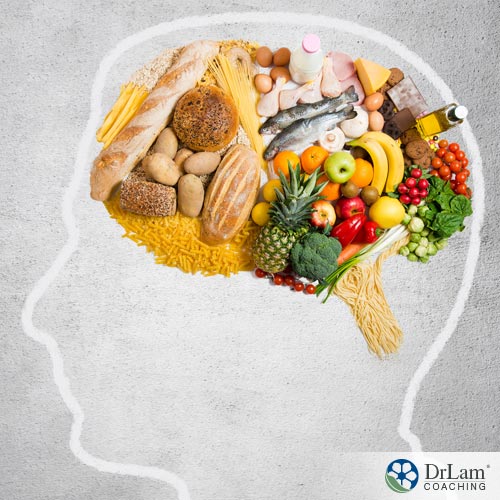 Eating is supposed to boost your energy right? Feeling sleepy after having a meal can be normal, especially if it was a heavy meal. But are you among those who frequently experience fatigue after eating? Don't worry, you aren't alone. We see countless people in our nutritional coaching program with this problem. People often resort to coffee and energy drinks thinking that they might help. But all they get is a temporary relief, and the problem soon returns. In such cases, understanding the root cause of the problem is important for effectively dealing with what is going on.

How Your Body Gets Energy from Food

Your body needs energy for functioning and survival. This energy is derived from the food you eat. The digestive system breaks down food into glucose which your body utilizes as energy. Then it triggers various responses within the body. It secretes hormones such as cholecystokinin, amylin, and glucagon to increase a feeling of fullness, produces insulin, and raises blood sugar to transfer glucose into cells and throughout the body for energy.

As the digestive system is the major energy production center, your overall health largely depends on its healthy functioning. When the digestive cycle is not functioning properly, it can trigger several unpleasant symptoms including feeling fatigue after eating. Various factors such as unhealthy food choices, chronic infections, and stress can affect digestive health. Excessive stress can negatively impact various systems of the body including the digestion.

Your body is equipped with a natural stress-fighting mechanism called the NeuroEndoMetabolic (NEM) Stress Response system. It is an intricate network of various organs and six circuits, including the bioenergetics circuit, which function in close coordination to help fight stress. A pair of walnut-shaped adrenal glands, located above the kidneys, are also part of the response system.

During stressful situations, the NEM signals your adrenal glands to secrete the anti-stress hormone cortisol. However, when stress is constant, the adrenals can get overburdened and are no longer able to secrete adequate cortisol. This can affect the natural stress-fighting ability of your body, which can lead to adrenal fatigue.

As the adrenals get more and more overworked with consistent stress, the result is a cortisol imbalance which can disturb the entire NEM stress response system. As the NEM connects various organs and circuits, the function of related organs is also affected.

People in the advanced stages of AFS have a weak body. Everyday functions of the body and organs - including the liver, pancreas, and thyroid of the bioenergetics circuit - gradually begin to slow down. This can complicate the actions necessary for maintaining the health of the body, which in turn can trigger negative reactions such as experiencing fatigue after eating. These are the people who come to us in our nutritional coaching program.

The bioenergetics circuit of the NEM system comprises of the liver, pancreas, and thyroid. Any imbalance in this circuit can lead to mitochondrial disorder, sugar cravings, reactive hypoglycemia, catabolism, dizziness, insulin resistance, and weight gain. 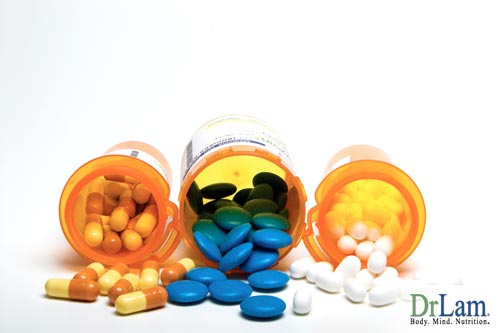 The pancreas and liver play key roles in the digestion process. The pancreas secretes enzymes such as trypsin, chymotrypsin, amylase, and lipase which help digest proteins, breakdown carbohydrates, and convert fat to cholesterol and fatty acids. It also helps transport glucose to tissues through the blood and helps the liver absorb glucose.

A major detoxification center of your body, the liver performs multiple crucial functions. It secretes bile which helps in detoxification and digestion. It also helps in the metabolism of fat, protein, and carbohydrates, and it maintains a healthy level of blood glucose and various other chemicals in the body. Dysfunction of the liver or pancreas has a direct impact on the digestion process which can contribute to fatigue after eating. 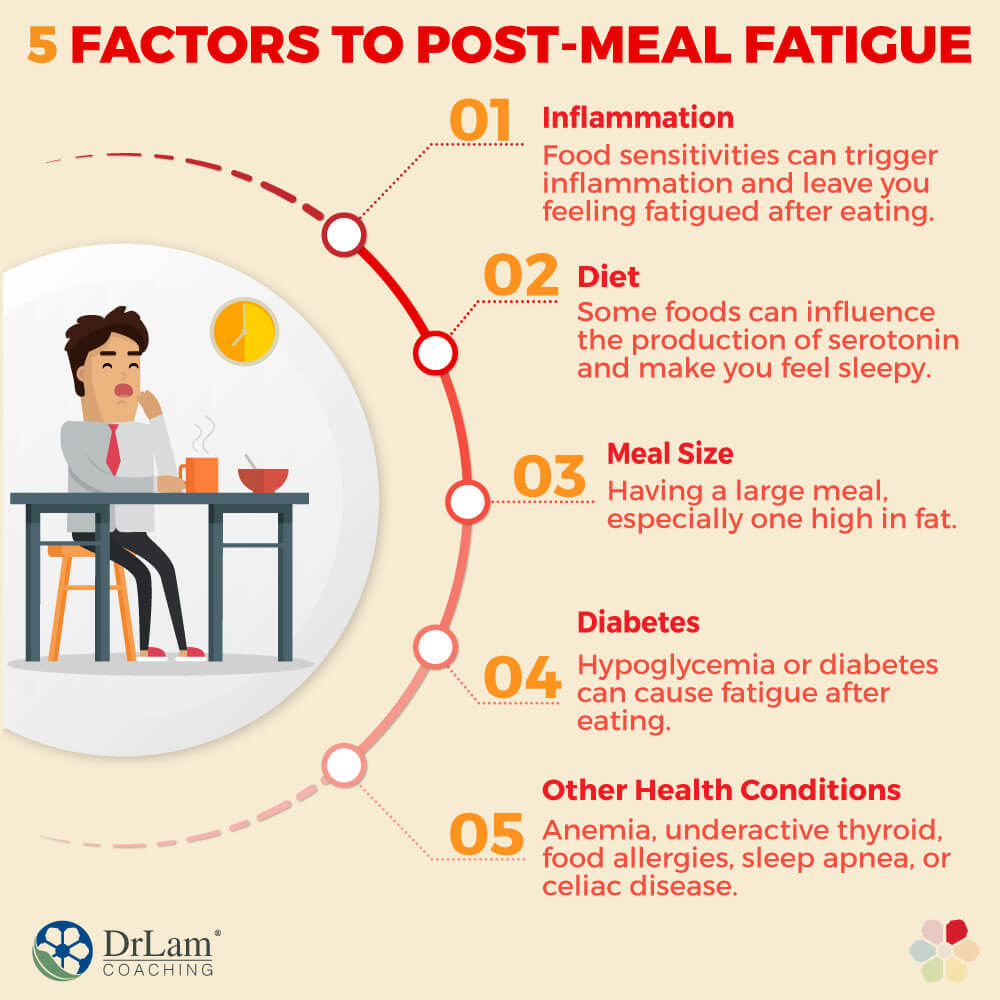 Factors Contributing to Fatigue after Eating

AFS suffers frequently experience post-meal fatigue. However, there are several other factors that could lead to fatigue after eating.

Here are five contributing factors to post-meal fatigue that affect adrenal fatigue sufferers and other people:

Food sensitivities can trigger inflammation which can leave you feeling fatigued after eating. AFS sufferers tend to have increased food sensitivities. Identifying your trigger foods and eliminating them from your diet is the first step to reduce the risk of inflammation and keep up your body’s energy level at its peak. Taking a food sensitivity test is one way we help our clients identify these triggers.  Eating inflammatory foods may add to the problem. There are supplements that you can take to manage the inflammation as well.

Eating sugary foods can cause excess secretion of insulin which raises the level of tryptophan in the brain. This leads to increased production of neurotransmitters melatonin and serotonin which produce a calming effect and regulate sleep. Over 90 percent of serotonin in your body is present in the gut where the hormone regulates intestinal movements. Carbohydrate-rich foods such as rice, pasta, bread, and potatoes can also raise serotonin levels making you feel sleepy.

You can also feel fatigue after eating processed foods as they are quickly absorbed by your body, causing a spike and drop in blood sugar levels leading to tiredness. With our coaching clients, we meticulously go through their diet to ensure they are getting the optimal nutrition for their body. Eating a nutrient-dense adrenal fatigue diet can significantly improve your energy levels and help beat that post-meal fatigue.

Having a large meal, especially one high in fat, can make you feel tired. This is because your body needs to work more to break down the large quantity of food, using more energy in the digestion process and making you feel sluggish. Consider having smaller meals throughout the day to help maintain your energy levels. 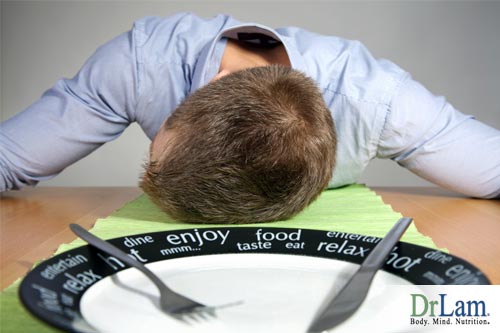 If you experience fatigue after a meal, then it could indicate symptoms of hypoglycemia or diabetes. People with hyperglycemia have high blood sugar levels. The food you eat is converted to glucose or sugar which is transported through the bloodstream to cells for energy. Insulin secreted by the pancreas transports this sugar to cells through the blood for energy. Diabetics tend to have insufficient insulin, leaving sugar with no way to be transported into cells. Instead, it remains in the bloodstream thus causing elevated blood sugar levels which can lead to fatigue. If you have diabetes, you should consider focusing on a nutrient-rich yet low-carb diet to maintain stabilized blood sugar levels.

Feeling fatigued after eating could also be due to certain health conditions such as anemia, an underactive thyroid, food allergies, sleep apnea, or celiac disease. In such cases, identifying and correcting the health problem could be necessary before you’re able to curb post-meal fatigue. Make sure you talk to your health care practitioner to rule out any other possible issues. If your doctor has not been able to identify any possible reason, then it may be due to adrenal fatigue.

Eating is supposed to raise your energy levels. Feeling a little drowsy after having a meal can be normal, but if you tend to frequently experience fatigue after meals, then it could be a matter of concern. This is extremely common in adrenal fatigue. We see countless count people in our coaching program come in with this problem. It takes an experienced health practitioner to identify the root cause and to understand what is really behind the fatigue after eating.

In AFS, the various functions of the body, including digestion, slow down to ensure energy conservation and survival. This can lead to tiredness after eating. Some of the other factors for post-meal fatigue include inflammation; eating foods that are processed, rich in carbohydrates, and tryptophan; food sensitivities; having a large, high-fat meal; and the presence of health conditions such as diabetes, underactive thyroid, anemia, and sleep apnea.

In our coaching program, identifying the root cause of post-meal fatigue and correcting the problem from its roots is essential. Once the root cause is identified, a plan can be formulated to help correct the problem. Eating a nutrient-rich adrenal fatigue diet, watching your blood sugar, and eating smaller meals can help. There are many other solutions to resolving this problem.

If you are suffering from this issue and unable to find relief, give our office a call to find out what your options are. We offer a free** initial appointment where you can talk to one of our coaches and really start to understand what is going on in your body. We will let you know if our cutting-edge nutritional coaching program is the right fit for you or not. Stop feeling tired after eating and start getting your health and life back.
Free Health Consultation

If you usually have fatigue after eating, what foods should you try?