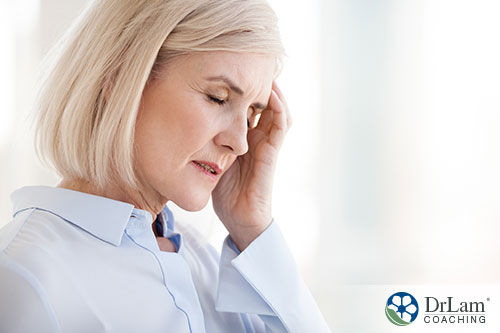 Menopause is one of the most significant physiological events in a woman’s life. Different women can experience it in vastly different ways, and so you might be asking: why is it that some women can glide through this period with barely any symptoms while others are stuck suffering from anxiety, insomnia, and menopause brain fog?

If you’re one of the women really struggling with the decline in mental clarity, memory, mood, ability to sleep, and the ability to focus while undergoing menopause, please know that you’re not alone.

You might be wondering how it is that hormonal changes related to your reproductive system could affect something like your ability to concentrate or remember things. The reason is that your hormones affect every system in your body. And, in fact, the control center in your brain - the hypothalamus and pituitary gland - is what regulates your hormones.

The Relationship Between Menopause and Stress

The NeuroEndoMetabolic (NEM) Stress Response is your body's global response to stress. It’s composed of six circuits of organs and systems that work together to fight stress. And big changes, like menopause, can be very stressful on the body. These six circuits are the Hormone, the Bioenergetics, the Cardionomic, the Neuroaffect, the Inflammation, and the Detoxification circuits.

Although your reproductive hormones are part of the NEM’s Hormone circuit, when dealing with issues like memory, mood, or focus, you need to look at the Neuroaffect circuit. That will help you get a better understanding of how the stress of this big change is leading to menopause brain fog.

Your NEM’s Neuroaffect circuit is composed of the autonomic nervous system (ANS), the brain, and the microbiome. This triad uses neurotransmitters to communicate.

That’s the first clue on how a hormonal event such as menopause can lead to issues in the Neuroaffect circuit and vice versa. There is an overlap between hormones and neurotransmitters. Some chemicals fulfill roles that fall under both categories. Also, the microbiome, which is your gut’s microorganism ecosystem, has a huge impact on both. And your gut is responsible for producing many of your neurotransmitters and hormones.

Lastly, because we are talking about an event that can be quite stressful on the body, we must also consider the adrenal glands. The adrenals produce the body’s main anti-stress hormone, cortisol.

Like all other hormones, cortisol fluctuates throughout the day but should remain within a healthy range. When your body undergoes chronic stress, however, cortisol will begin to increase to above-average levels. That brings on the symptoms of Adrenal Fatigue Syndrome (AFS) after a while. If the AFS advances, the adrenals can become so exhausted that their cortisol output drops completely.

Symptoms of AFS include: 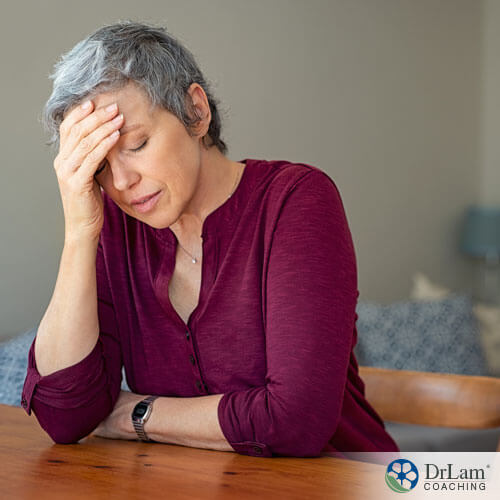 As you can see, there are many similarities between the symptoms of AFS and menopause.

One of the main triggers of menopause brain fog is inflammation. Inflammation almost always begins in the gut. When your gut’s microbiome goes out of balance, the tight junctions in your gut’s lining begin to loosen, creating leaks. This is called dysbiosis. The leaks then allow substances into your bloodstream that shouldn’t be there, such as food particles, toxins, and pathogens.

Your immune system will launch an attack on these substances, creating inflammation there. And although this is a healthy and important reaction, if the dysbiosis is not addressed, this cycle will keep repeating, making the inflammation chronic.

Chronic inflammation that begins in the gut can travel to other parts of the body, including the central nervous system (CNS). Inflammation in the CNS has been shown to trigger mood issues, such as anxiety and depression, as well as insomnia and brain fog. It has also been implicated in neurodegenerative diseases.

Continuous exposure to stress chemicals, such as cortisol, can significantly affect brain functioning. They have a direct impact on the centers in the brain that regulate cognitive ability and emotional response. Higher than normal stress levels during menopause and due to menopause is another main culprit of menopause brain fog. And the mood changes that can happen at this time don't help either.

Some of the herbs discussed below are very good for coping with all the symptoms mentioned above. But it's important to note that without diet and lifestyle adjustments to address the inflammation and stress at the root level, the effects will be transient at best, and in some cases may even become harmful.

That’s why it’s really important to approach recovery in a holistic way. This includes recovery from AFS, Neuroaffect dysregulation, menopause brain fog, and menopause symptoms in general. Many people need the support of an experienced professional. This is especially the case if your AFS is advanced or if you have more than one chronic condition. 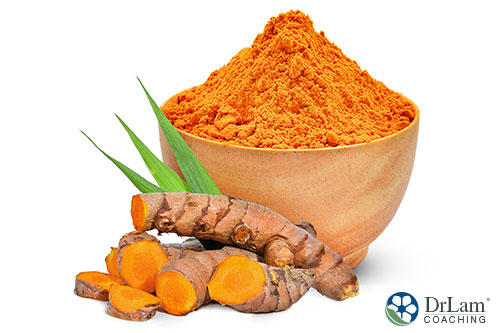 Curcumin is one of the best inflammation fighters out there. It also fights oxidative stress and the overactivity of the hypothalamic-pituitary-adrenal (HPA) axis. The HPA is the hormone cascade that begins with the control center in the brain and results in cortisol secretion by the adrenal glands. In that sense, curcumin is unique. It is able to address the depression that comes from low-grade inflammation, as well as AFS brain fog and menopause brain fog, on many different fronts.

It’s also safe, effective, and well-tolerated by most people. But one thing to watch out for when taking it orally is that it can worsen digestive issues, such as constipation, which is common in AFS.

St. John’s Worst is best known for helping with depression. Several studies have been conducted on its effectiveness in treating different types, such as mild-to-moderate depression, major depression, and seasonal affective disorder. It’s also been shown to aid with sleep. Its mechanism of action includes inhibiting monoamine oxidase and serotonin uptake, modulating IL-6, and acting as an agonist for sigma receptors.

In one placebo-controlled study of menopausal women, 900 mg of St. John’s Worst over a 12-week period showed improvement in mood and psychosomatic symptoms. But although these studies are promising, the overall evidence is still inconclusive.

There are also some safety concerns to take into account when considering using St. John's Wort.

First of all, it should not be taken with SSRIs or by people with a history of mania or hypomania. Secondly, it has some drug interactions, such as with those used to treat HIV/AIDS, like Indinavir, and other anti-viral medications. So, like with any herbal remedies or supplements, just because something is natural doesn’t mean it has no side-effects. You should only take it under the supervision of your physician.

Rhodiola is a well-known adaptogen – a substance that helps your body adapt to stress. It's great with boosting energy, relaxing muscles, and regulating blood flow. It is very useful if you're in the early stages of AFS, as it supports your cortisol production while slowing down its secretion. This can help keep it more evenly distributed throughout the day rather than going through the erratic highs and lows common in early AFS.

Rhodiola can also help protect against anxiety, fatigue, moodiness, and depression. And it can improve cognitive functions. However, beware of overstimulation especially in later stages of adrenal fatigue as it might only worsen how you feel.

Gingko Biloba is an herbal remedy that’s been in use for millennia in traditional medicine, especially in Chinese Medicine. It’s a powerful antioxidant that can help fight free radical damage in your organs, and it can be very helpful with mental symptoms of AFS and menopause, such as menopause brain fog, memory loss, and general mental tiredness.

Gingko helps neurotransmitter-turnover and improves circulation in the hippocampus, which is a region in the brain that helps with new memory formation, learning, and emotions. It also improves the usage of oxygen and glucose, leading to more effective energy production – an important step in recovery from AFS.

It should not be taken by those with a higher vulnerability to bleeding, those taking anticoagulants, or those undergoing surgery.

If you suffer from heart palpitations and anxiety, two symptoms commonly experienced in AFS as well as menopause, lemon balm might be a good option for you. It’s also been shown to improve mood and cognitive abilities.

Although lemon balm has a good safety profile, if you’re taking medication for diabetes or thyroid issues, or any kind of barbiturates, you should be careful and consult your doctor first before use.

Some Precautions and Considerations

There are many other supplements, herbs, hormones, and glandulars that are used in adrenal fatigue recovery as well as in helping with menopause symptoms. But the most important takeaway here is that, without the proper guidance, even the safest and most natural of them can still have unwanted side-effects if not used properly.

Some considerations you should take into account before using any natural remedy include your age and gender, what you’re using it for, what other medications or supplements you’re taking, how weak or fragile your constitution is, how severe your condition is, how long you plan on taking the remedy for, the dosage of the remedy, and what other diet and lifestyle changes you’re making.

With advanced AFS, paradoxical reactions are common, and you may end up getting the opposite effect of what you’re taking the remedy for if you’re not careful. You should also avoid, under all circumstances, the shotgun approach where you take a cocktail of different supplements and remedies, hoping some combination will be the magic cure. This usually backfires, and on the rare occasion it helps, you won’t know which supplement or remedy is the one that is working.

Having said that, however, there is a supplement we would recommend for someone who experiences brain fog while going through menopause. It is called LipoNano Curcutrol, which contains curcumin and resveratrol delivered by means of cutting-edge liposomal technology. Liposomal technology allows for a hydrophilic compound, i.e., something that easily dissolves in water, to become encapsulated in a lipid carrier. Lipids, being fats, normally tend to repel water and vice versa.

The benefits of curcumin are legion. Its antioxidant and anti-inflammatory properties may help support brain health, certain cancers, as well as heart disease, to name but a few. Resveratrol, a polyphenolic compound found in certain berries, grapes, and grape products, has anti-inflammatory and antioxidant properties that, according to literature, help to protect you against health issues like Alzheimer’s disease, certain types of cancer, skin conditions, and arthritis.

The effectiveness of resveratrol in addressing brain fog, according to literature, is due to its ability to improve blood flow to the brain, together with its antioxidant activity that scavenges free radicals. It is also suggested that resveratrol acts at a cellular level and may improve cell survival while slowing down cell death. It may also improve your brain synapse function. Your brain synapses allow for the transportation of chemical messages to a target destination in your body. Taken together, these factors may help address brain fog due to menopause. 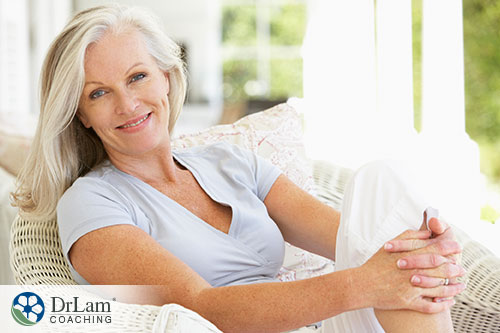 Whether your symptoms are purely due to menopause, or you’re also suffering from AFS and Neuroaffect dysregulation, there are a few universal guidelines that can and do help to reduce menopause brain fog. These include:

There are some excellent herbal remedies that can help with menopausal brain fog - curcumin, St John's wort, gingko biloba, rhodiola, and lemon balm. But beware of starting something without first consulting your health practitioner.