Adrenal Fatigue Recovery (Am I on the Right Track?) 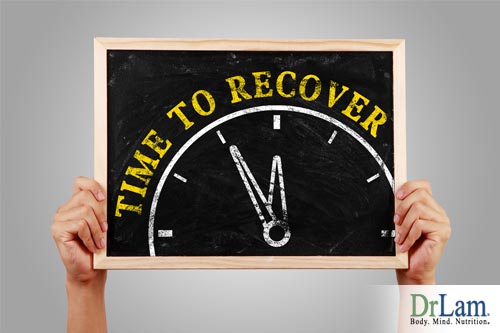 The speed of Adrenal Fatigue recovery varies greatly from person to person. Under expert guidance, the process normally takes a few weeks in mild cases to a few months in moderate cases. In severe cases, much longer time might be needed.

Many people question whether a total and complete Adrenal Fatigue recovery is possible. The answer is yes in the vast majority of cases, but only if done right. Adrenal Fatigue Syndrome often takes a decade or more to develop. It is important to allow the body time to recover. A few months of recovery is considered a short time within this time horizon. Time is a great healer when the body is given the proper nutrients along with proper lifestyle and dietary protocols. Those who demand a quick Adrenal Fatigue recovery invariably become disappointed because the body is not a light switch that can be turned on and off at will. A systematic and logical approach works the best under professional guidance.

The Adrenal Fatigue recovery curve is a graphical representation of how the body recovers on the vertical axis plotted against time on the horizontal axis. A good recovery curve usually consists of multiple mini-cycles. Each cycle has three sequential periods, resembling an "S" curve that last from 1-6 months each. The overall successful Adrenal Fatigue recovery plan consists of multiple "S" curves in an upward sustained series without allowing any major downward crashes. Over time, this will resemble a series of stair-steps upwards, as illustrated in the graph below. 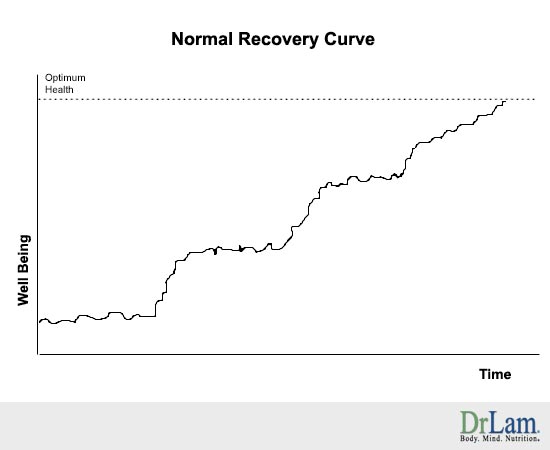 Let us look at this cycle in more detail. The overall Adrenal Fatigue recovery curve is composed of multiple mini-cycles. Each mini-cycle consist of three periods:

As a person goes through multiple successful mini-cycles without major setbacks, the overall sense of well-being gets better with each cycle. Though the most dramatic improvement often comes in the first few cycles, one accumulates more energy with time, and fatigue becomes less pronounced. Any setbacks between the cycles are often less severe as the previous crashes. One archives a higher high and a higher low in terms of well-being with time. This is recovery at its best. The body is allowed to rest after each upward movement. It has time to build up reserve before ascending again. This reserve building time is critical. Proper nutrients administered here strengthen the adrenals and cushions the mini-crashes and setbacks so frequently experienced by all. Having enough reserve allows the body to continue its rebuilding process on a sustained basis while withstanding insults from daily life.

Most people have a mistaken belief that the hallmark of a successful Adrenal Fatigue recovery program has an early onset of increased energy and fatigue removal. They expect this to be sustained on a linear basis uninterrupted in an upward trend line. This ideal situation only occurs in a minority of cases where the fatigue is very mild and under expert guidance. For most cases, due to internal derangement of the adrenals, the road to recovery is laden with potholes and crashes.

Most self-guided programs achieve success in ascending the first cycle. Those who take stimulatory nutrients often experience an initial sense of well-being, followed by a prolonged plateau that is unable to ascend further. We call this "hitting the wall". Regardless of what nutrients are given, the body fails to gain more energy. Fatigue continues, as illustrated in the graph below in line A

Overtime, the body starts to decompensate, and with a stressful event, a crash is triggered and the Adrenal Fatigue recovery process goes backwards down a few steps. The body returns to a function worse than before. It then stabilizes for a while but is unable to regain its composure. Extraordinary effort is needed to gain a small incremental sense of well-being. With each succeeding stress, the body decompensate further. Stressors can be physical such as excessive exercise, emotional such as mental strain, or nutritional such as taking more nutrients that are thought to be good but cannot be processed or assimilated. The overall recovery curve resembles that of a stair step going down, with lower lows and lower highs as illustrated in line B. 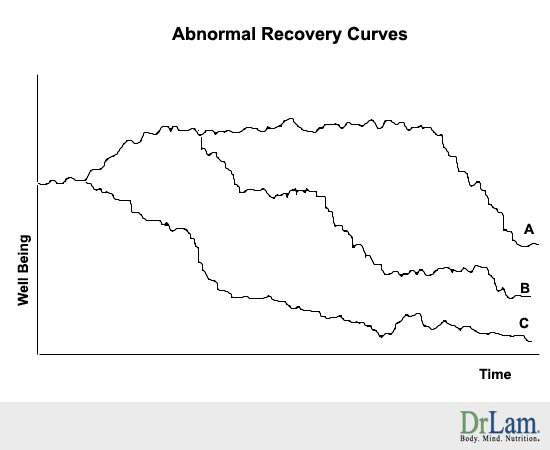 Those whose bodies are constitutionally sensitive may not even experience the initial onset of energy. They crash right from the beginning and never fully recover from it, as illustrated in line C.

When having AFS do you ever get to the point where you can live a normal life? Or is AFS something that will always be around and once I stop taking supplements my adrenals can worsen again?

A person develops AFS usually is because of lifestyle and personality. Some people are genetically prone. If they learn what causes them to have AFS and learn to manage them well, then AFS should not recur. For overall health purpose, it is always good to take some supplements because the food nowadays does not have as abundant nutrients as they used to be.